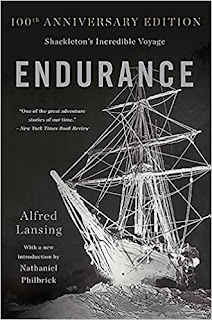 Endurance: Shackleton's Incredible Voyage is the type of book you read when, 1. You've realized you need to work on personal discipline, and 2. You're open to stories of survival against all odds.
Endurance is the story of Ernest Shackleton's Antarctic voyage in 1914. Imagine setting sail for Antarctica in a single ship, determined to reach uncharted territory, facing known and unknown dangers, without phones, high power radios, or promise of success. Now imagine your ship gets lodged in the ice and you have to make sure your crew survives to see civilization again. This is what Shackleton and his crew faced when their rightly-named ship, The Endurance, halted in the ice for the final time.
Alfred Lansing tells the story in such a way that it's easy to read quickly, not realizing how many pages have been read until a new chapter reminds you. As a work of nonfiction, it's engaging and fascinating. As a work to inspire your own sense of responsibility and dedication, it's refreshing.
I highly recommend adding it to your collection and really taking in the lessons Shackleton and his crew can teach.
at 11:36 AM No comments:

The Solace of "On Growing" 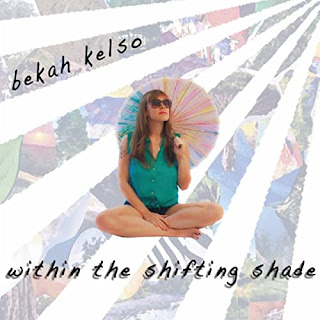 "It's okay to fall down; there is much to be learned from the ground."
Bekah Kelso's "On Growing" is one of my favorite songs. The entire thing was written on the theme, from the lyrics to the steadily expanding soundtrack that ends in an inspiring, bombastic reveal. If you're looking for something to pull you out of bed in the morning, I'd recommend giving it a try.
Listen here
Buy the song
Find out more about Bekah Kelso
at 9:20 AM No comments:

Email ThisBlogThis!Share to TwitterShare to FacebookShare to Pinterest
Labels: Sounds of Solace

Is discipline better than motivation? 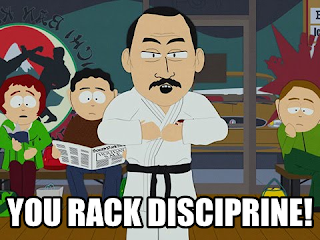 In early 2019, a friend informed me that I lacked discipline. I argued I did not lack discipline; I lacked motivation. She sent me a South Park meme in which the karate instructor says, "Cartman-San! You rack disciprine!" Cartman replies, as can be expected, "Nuh uh, I do not rack disciprine!" But he did, and, as it turned out, so did I.

The more I thought about it, the clearer it became. If I waited until I became motivated, I would never get anything done. Motivation, as great as it feels to have it, really is a false god. It's an ideal way to get something half done. It's discipline that pushes you through the other half. In my case, in the deepest of my dark holes, it was the only thing that could get me moving at all. I was the only person who could make that happen.

Email ThisBlogThis!Share to TwitterShare to FacebookShare to Pinterest
Labels: On Discipline

The solace in "Surrender"

Now and then I come across a song that knocks me over in a positive way. In this case, the video is also a powerful statement. The song is called "Surrender" by MALINDA, and is a story of post traumatic stress disorder in sound and motion.
I can't fully describe how much I love this song. It's almost as if it came out of my own brain - including how said brain has, at times, thrashed about in a fashion similar to the dancing in the video. It will be an important signpost in my journey for life.
If you haven't seen it, you can check it out below, or you can buy the CD.
at 2:36 PM No comments:

Email ThisBlogThis!Share to TwitterShare to FacebookShare to Pinterest
Labels: Sounds of Solace

Some of you may already know me from my regular website, ChristySummerland.com. Ordinarily it makes sense to post all writings on your official site, for search engine and simplicity's sake, but there's a reason I separated Summerland Stories from my main site:
I'm not sure where this blog is going to go. While many of the posts might be shared on my other pages, Summerland Stories is more for the flotsam and jetsam that comes from my non-work personal experiences. I don't want to clog other places with whatever comes to mind during my journey from the darkness.
If any of my experiences are helpful for you, great. If not, I hope you find what you need elsewhere. For me, we'll see how it goes.
at 12:40 PM No comments:

One Step From The Edge

A story of overcoming evil.